The goal of this program is to promote literacy within the community. The Farmingdale Reads committee periodically chooses a theme and age appropriate book selections which best fit the year’s theme.  ​An author of a featured book is invited as a guest speaker to participate in the book reading campaign. 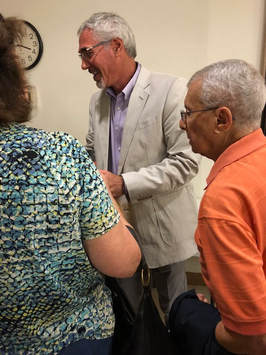 Michael Lella the son of the main character, Pino Lella, discussed his father's role as a spy for the Allies during WWII in Nazi-occupied Northern Italy. Later, Michael called his father on the telephone allowing the audience to ask him questions. The book's author, Mark Sullivan, was also reached by phone and answered many questions. Over 90 people attended and were enthralled by Pino's experiences.
​
Library Director, Debbie Podolski, facilitated the program that included school district superintendent, Paul Defendini's, talk about the activities of the K-5 students related to the theme of the book - Farmingdale Makes it Mark - and how the children were going to make a difference in the community just as Pino did for those he helped. She also thanked resident John Gibilaro, a friend of Michael Lella, for bringing the book to her attention.